It’s a great compliment to a massage therapist when the person receiving falls asleep during a session.

Those little zzz’s say trust, relief, serenity and healing. And for this massage therapist, it most often happens during the Swedish portion of the treatment, when long flowing strokes push dream-like consciousness over the line into sleep.

So what on earth is going on when the therapist finds a knot to end all knots and the client takes a snooze?

Let me explain. In the midst of a treatment combining myofascial release and TrP release for adhesions and tension in the temporalis and masseter group. My client went from “that’s it”…” to total zzzz’s. During trigger point release!

I hit the Travell & Simons (not Simons & Travell) trigger point chart – I had touched, very lightly, above anterior TrP1 of the temporalis. Whatever happened next was totally weird. 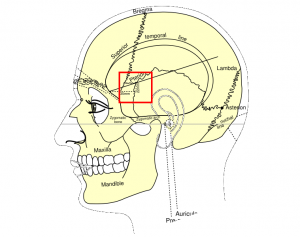 The client went into sleep, snoring lightly and diaphragm breathing for perhaps the first time since I’ve been treating her. Y-reka! A minute later it was gone.

“I’m not sure either,” I said. “But you relaxed beautifully. I think your whole body just did a reboot.”

I’ve been looking in a lot of my massage books, but only finding general points to induce sleep. I flipped to Wikipedia for help. In this region the skull bones are thinnest. It is the junction of the coronal, sphenoid-parietal and squamous sutures. This area is certainly a big player in the TMJ patterns of jaw clenching and imbalanced sutures. Craniosacral anyone? Polarity?

Baffling. This little spot is called the Pterion. Uhuh. Try saying that with a mouthful of granola.